The following press-release, by Jennifer Little, first appeared on Massey News on 28th May 2014. it also appeared in the NZ Book Council's online newsletter Booknotes Unbound on 29th May.

In his new role as managing editor of the country’s longest-running poetry journal, Poetry New Zealand, he hopes to infuse something of the spirit and energy of that far-flung poet in future issues of his new literary baby.

In the spirit of his predecessors at the helm of the periodical, he intends to keep it youth-oriented, politically engaged, experimental, and culturally diverse – all necessary attributes for an international journal of poetry and poetics.

Ross – a poet, editor and critic who teaches fiction, poetry, and travel writing in the School of English and Media Studies at the Albany campus – replaces distinguished poet, anthologist, fiction-writer, critic and retiring editor Alistair Paterson, who held the role for 21 years.

From this year, Poetry New Zealand will be edited and published by Massey’s College of Humanities and Social Sciences. An agreement was signed by its head of the School of English and Media Studies, Associate Professor Joe Grixti, Poetry New Zealand’s former managing editor Paterson, and production manager John Denny, for the future housing of the magazine by the university.

The journal originated in 1951 when poet Louis Johnson began publishing his annual New Zealand Poetry Yearbook. Johnson’s series stopped in 1964, but a bi-annual version re-christened as Poetry New Zealand was revived by Frank McKay in the 1970s and early 80s with a total of six issues, each with a different guest editor. It began appearing twice yearly under Oz Kraus at the end of the 1980s, initially with a series of guest editors and then with Paterson at the helm.

Currently working on his first issue, the 49th in the series, which is due out in October this year, Ross says the journal will continue to feature work primarily by established local and some overseas poets, as well as commentary and reviews. Pivotal to attracting and fostering a new generation of poets is his wish to showcase emerging – and inevitably challenging – poetic trends, voices and styles.

“There will still be a featured poet in each issue – but we’ll have to wait and see who’s been chosen to inaugurate the new yearbook version. It may be surprising to some!” he says. “Poetry New Zealand is for readers and poets who crave stimulation and real challenges from encountering experimental work that’s not always immediately accessible,” he adds.

He’s keen on the idea of including some foreign language poetry in translation by overseas-based or migrant writers living here.

Cosmetic and technological changes are afoot too. The feature poet’s portrait as the cover will be replaced with fresh new artwork. Contributers can also submit their work electronically for the first time. And instead of two issues per year there’ll be an annual edition with roughly twice the number of pages.

The changes will not only open up new directions for readers and writers, but an opportunity for graduate students studying creative writing and communication at Massey’s three campuses in Auckland, Wellington and Palmerston North to become involved in editing, design and layout through internships.

“It [Poetry New Zealand] will help complement the link between teaching and doing your own work. It’s good for students to see that while you are at university, even in arts and literature you can be learning in a pragmatic way. These are real world skills.”

Ross, who was featured in Poetry New Zealand’s Issue 22 in 2001 and guest-edited Issue 38 in 2009, has a wealth of experience in writing, editing and teaching poetry. He shares his poetic interests via a highly stimulating literary blog, The Imaginary Museum.

No stranger to experimenting with genre, as in City of Strange Brunettes (1998), Chantal’s Book (2002), and To Terezin (2007), as well as in foreign languages with Celanie, (which he translated from German – via French – into English), he also co-edited the trilogy of audio and text anthologies Classic, Contemporary and New NZ Poets in Performance (AUP, 2006-8).

While he acknowledges editing Poetry New Zealand is a time-consuming labour of love fitted around a busy teaching and PhD supervision schedule, he will be supported by an advisory board including Massey academics, poets and editors Dr Thom Conroy, Dr Ingrid Horrocks and Associate Professor Bryan Walpert; along with poet and academic Dr Jen Crawford; publisher and printer John Denny; poet and 2013 Burns Fellow David Howard; poet and editor Alistair Paterson ONZM; and poet and academic Dr Tracey Slaughter.

Ross says his ultimate aim is to make Poetry New Zealand as relevant and rivetting to a new generation of readers and writers as the most powerful films, novels and digital content. Like the graffitied words of that young Arab poet. 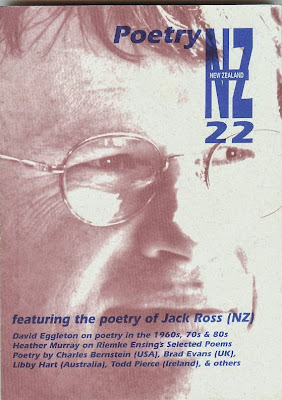