Talking Cats and Other Creative Creatures [20/2/15] 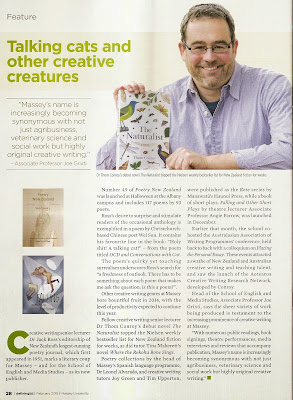 The above feature article, by Jennifer Little, appeared in the February 2015 issue of Massey's Defining NZ magazine:

“Sparks of light in an ocean of stultifying babble, laser beams penetrating the Stygian darkness of our contemporary linguistic wasteland” – this bold vision is articulated by Dr Jack Ross in his introduction to the poems he chose in his debut as managing editor of the Poetry New Zealand yearbook.

Ross’s editorship of New Zealand’s longest-running poetry journal, which first appeared in 1951, marks a literary coup for Massey – and for the School of English and Media Studies – as its new publisher.

With poems by new and diverse voices – from one on bullying called "Life is Unfair" by an adolescent girl to a poetics professor and feature poet Lisa Samuels’ “extravagantly experimental” works of linguistic acrobatics, plus several translated from foreign languages and many more from local and international poets – Ross’s issue #49 was launched auspiciously on Halloween at the Albany campus and in Wellington in December.

The bumper selection of 117 poems by 93 poets was siphoned from well over a thousand submissions sent in via post and email. Two essays, a review and brief notices of 25 new poetry books and magazines are also included in a fatter new format published annually instead of the previous two slimmer volumes a year.

Ross took on the role after being approached by former editor Alistair Paterson and publisher John Denny. He’d been the feature poet and cover image on issue #22, and is the author of several works of experimental poetry, including City of Strange Brunettes (1998), Chantal's Book (2002), and To Terezin (2007), as well as in foreign languages with Celanie, (which he translated from German – via French – into English). He also co-edited the trilogy of audio and text anthologies Classic, Contemporary and New NZ Poets in Performance (AUP, 2006-8).

His desire to surprise and stimulate readers of Poetry New Zealand is exemplified in a poem by Christchurch-based Chinese poet Wei Sun. It contains Ross’s favourite line in the book; “Holy shit! A talking cat!” – from the poem titled "OCD and Conversations with Cat".

The poem’s quirky yet touching surrealism underscores his search for “a freshness of outlook. There has to be something about each poem that makes me ask the question; ‘Is this a poem?’”

Creative Writing tutor and award-winning fiction writer Tina Makereti’s novel Where the Rekohu Bone Sings (Random House) also made the Nielsen Weekly bestseller list and was widely acclaimed for its original take on the cross-cultural complexities of being Māori, Moriori and Pakeha.

Award-winning playwright and theatre lecturer Associate Professor Angie Farrow’s new book of short plays, Falling and other short plays (Steele Roberts) was launched in December amid a season of her plays performed in Palmerston North, with a new season planned for Wellington this year.

To top off an exceptional year, the school co-hosted the Australasian Association of Writing Programmes conference (AAWP) at the Wellington campus from November 30 to December 2, held back-to-back with a colloquium on “Placing the Personal Essay”.

The events attracted a swathe of New Zealand and Australian creative writing and teaching talent. The launch of the Aotearoa Creative Writing Research Network (ACWRN), developed by Thom Conroy, was a welcome initiative for those attending to connect more readily across distances as a community of academics, artists and teachers.

These are just highlights in a year of abundant literary output and success by staff and students, says Associate Professor Joe Grixti, head of the School of English and Media Studies.

“It's very timely for us to be nurturing provocative new voices and perspectives – we need creative ways to illuminate and understand the complexity of human experiences beyond the mainstream.”

Massey teaches a range of undergraduate creative papers internally and by distance (travel, fiction, poetry, theatre) as well as a Master of Creative Writing. For more information go to www.massey.ac.nz 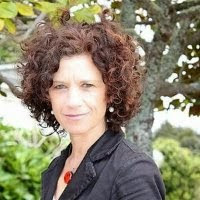