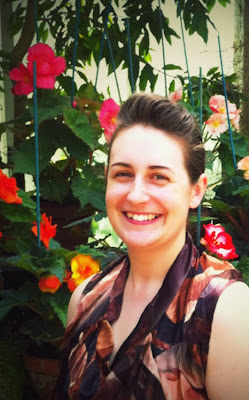 Poetry NZ is an international print journal of poetry, established in 1951 by Louis Johnson, and edited between 1993 and 2014 by Alistair Paterson. The magazine is now housed by Massey University’s College of Humanities and Social Sciences and is edited by Jack Ross. We asked Ross a few questions about editing Poetry NZ, and about local poetry and the brand new issue (full launch details below).

1. If the poet is ‘the priest of the invisible’ as Wallace Stevens put it, the editor is…?

Interesting question. I suppose the obvious answer is ‘the office manager’ (though it’s tempting to say the Pope) – but I have to admit that I tend to prefer rather more subversive models of the poet.

If, like Stevens, one agrees that the function of poets is to give “to airy nothing / a local habitation and a name,” then I myself like to imagine it as a kind of espionage: “God’s spies,” as Shakespeare says in King Lear.

Continuing with that analogy, I guess I like to fantasise about being the editor-as-M (from the Bond films), a kind of shadowy spy-master who assembles the bits and pieces coming across the desk to create a composite mosaic picture of where the principal dangers lie – all those dangers to humanity (eco-catastrophe, political fanaticism and intolerance, the erosion of empathy), which I’m convinced that it’s poets’ job to speak out about. “With your unconstraining voice / Still persuade us to rejoice,” as Auden put it in his great elegy for W. B. Yeats.

2. Poetry NZ was established in 1951. What attracted you to the role of editor of Poetry NZ in particular?

Over the years I’ve received a good deal of help and support personally from Alistair Paterson, my immediate predecessor in the role, and I’ve also seen just how much time and passion he gave to Poetry NZ and all its subscribers and contributors. I didn’t see any way in which I could emulate that degree of commitment while still retaining any time for my own writing (not to mention the demands of my job), so I did turn it down when he initially spoke to me about it.

When he and John Denny, the magazine’s publisher, approached me again late last year, though, it was with the suggestion that Massey University be asked to take over the journal – rather as Otago University has Landfall – and that was quite a different proposition. I began to see ways in which it might become a collective effort, rather than one person’s life’s work.

I think if the magazine is to continue, it has to draw in as many people as possible: guest editors, reviewers, essayists, artists, designers, event-planners and so on. A university gives you good access to such people. Having said that, though, I should emphasise that this is, and will remain, a magazine which reaches out beyond the confines of the institution – or, for that matter, the country. Poetry NZ exists as much to bring our poetry to the world as it does to mirror solely what’s going on in New Zealand.

3. A poet is usually profiled in each issue of Poetry NZ. Can you tell us a little about the featured poet for this issue?

Yes, I’d love to. The featured poet for this issue is Lisa Samuels, who teaches poetry and poetics at Auckland University. The reason I chose Lisa is because she’s an extremist: her poetry is of an extravagantly experimental type, which still tends to polarize people in this country. Also because she’s not a New Zealander, although she has chosen to settle here (and has written a very amusing meditation on the experience in her long book-length poem Tomorrowland – now also available as a CD).

This doesn’t mean that I’ll be reluctant to feature local poets in the future. Like Alistair Paterson, though, I think it’s important that we don’t get too protectively nationalistic in our approach to poetry here. Lisa, for me, ticked all the boxes – and I think that you’ll find the poems I’ve selected from her latest collection a challenging mixture of melopoeia and subversion: though perhaps it’s necessary to hear her perform them to get the full effect.

4. You mentioned that you are keen to showcase ‘emerging – and inevitably challenging – poetic trends, voices and styles.’ Are there interesting threads that link emerging work at the moment, or is the work interesting because it’s diverse?

A bit of both, I guess. I’m no enemy to political engagement in poetry, though I think it has to go beyond mere slogans, to be self-questioning, if it’s to retain any poetic interest. I’m also very interested in the growth of the new pastoral, together with its theoretical branch of eco-poetics, and I see a lot of passionately committed new work coming up in this field. Finally, I have a strong interest in translation and multicultural approaches to poetry. All three of these trends are represented in the issue, but I’d like to be able to include more work under each of these headings in the future.

5. Can you describe some of the poetry that will appear in this issue?

My favourite line so far in from everything I’ve read for the issue (well over a thousand poems, from an estimated 2-300 poets who’ve submitted) has got to be: “Holy s***! A talking cat!” That’s from a poem called ‘OCD and Conversations with Cat,’ by a young Chinese poet from Christchurch.

My favourite poem is probably ‘Life in Unfair,’ by an eleven-year-old girl who sent us a letter which assured us that her parents’ assent had been obtained before the poem was submitted. The poem is about bullying – and it speaks from the heart. I have to say that the moment I saw it I was determined to put it in (I did have a tangential vision of her whipping out a massive copy of Poetry NZ next time she runs into one of the ‘popular girls’ who hound her so unmercifully, and casually flicking it open to her name in the contents page. I suppose that they probably wouldn’t be all that impressed. I can’t think of a better way of protesting the unfairness of life, though, than by writing a poem about it and getting it printed in one of our most widely read literary journals …)

Besides that, there are some lovely translations from the Chinese, which I’ve been able to present in dual-text; some Russian poems translated by Anne Stevenson in collaboration with their author, Eugene Dubnov; a poem written simultaneously in French, English and Portuguese by the Angolan writer Landa wo; poems from Australia, Europe, Ireland, North America, and a variety of other places as well as virtually every corner of New Zealand. I hope I’ve provided enough surprises to keep everyone guessing!

6. What are your favourite reading conditions?

I’m sorry to say that I can only read comfortably whilst lying on my bed like a Roman emperor, with a book or bundle of papers balanced on my stomach. I’d like to be able to say that I can also, at a pinch, read in an armchair, or a café, or at my desk, but it would be a lie. I’ve been thinking of experimenting with lying and reading in a hammock over summer, but I’m a bit doubtful about the strength of the branches in our backyard which would have to hold it up.

7. What’s on your bedside table?

A travel book by Lawrence Durrell; an old children’s book by Arthur Ransome; a collection of SF short stories by Arthur C. Clarke; a collection of stories by Nathaniel Hawthorne (The Snow Image); a collection of fascinating tales from archaeology called The World’s Last Mysteries; and an MA thesis which I’m reading for examination. Until very recently there were a couple of dozen slim volumes of verse which I was reading for the reviews section at the back of Poetry NZ, but I’m giving myself a bit of a holiday from poetry at the moment. I like to jump from book to book, depending what mood I’m in: some I read in the evening, some in the morning before getting up.

Jack Ross is a poet, fiction writer and editor. He has published books of poetry and short fiction and has edited numerous collections of writing and a variety of journals. Ross has worked as a teacher of New Zealand literature and creative writing, and he is co-editor of a series of books dedicated to capturing New Zealand poets in performance. You can find out more about Jack Ross in his Book Council Writers file.

Auckland launch of Poetry NZ: Poetry NZ Yearbook will launch as part of Massey University’s Writers Read series, and you are invited to attend the celebration.

The launch event will incude Lisa Samuels, the featured poet in this issue, Jack Ross, the new Managing Editor of Poetry NZ, and a number of the other poets included. The magazine will be launched by A/Prof Grant Duncan, of Massey University’s College of Humanities and Social Sciences.

The line-up of invited readers will include the following: 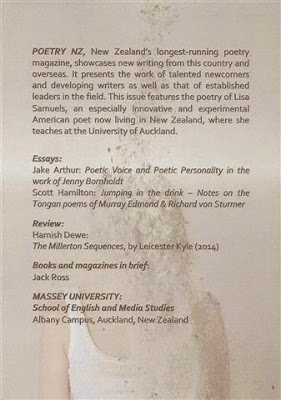